Concentration
Samadhi means concentration - like Heinz concentrated soup. One way to understand Dharma is to concentrate your soup. In your soup there are many ingredients - not just wholesome vegetables like leek and potato. There are also spices called greed, hate and delusion of many kinds. Some like it hot. This concentrated mass of goo is the homeless home, the ever seething cauldron of real life. False Holiness
Mostly people are trying to dilute, bury or unsoup their soup. Diluting means trying to become pure water. There are lots of wet people wandering around in spiritual centres competing in the race to have the thinnest soup. Yet adding water does not remove the goo - it just spreads it out and makes it thinner so that it ends up making everywhere sticky. This stickiness is called false holiness.

Unsouping
Then there is the therapy world. That’s where you try to unsoup your soup - trace it back to the original ingredients, put the carrots back in the ground. That might not be a bad idea if you have a particularly bitter soup, but generally the best way to improve a soup is to put something else in rather than try to take something out. Taking stuff out of one’s soup is the idea of trying to get back to a pure, uncontaminated self. Fortunately or unfortunately there is no such thing. Life is life-in-a-world. The world is not contamination, it is essential substance. More life requires more world concentrate, not less.

Buried Soup
Outside of the spiritual and therapy factories, burying the soup is more popular, but that does not work either - that’s what we call hypocrisy. Buried soup still has to be dug up every so often and it then tastes awful.

Thick Cream Soup
Real practice is to concentrate life, that is the way. Life should not be milk and water, it should be thick cream.

People talk about samadhi and think that it is some kind of technique or, even worse, a treatment. They think that Buddhism is meditation and meditation is medication - a cure for the stress disease, or something like that - this is all wrong. In fact, Buddhism will cure neuroses, but not the way you think. 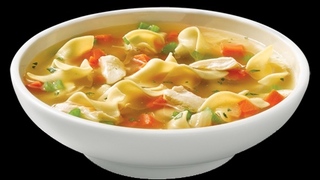 Samadhi is undiluted life. Samadhi is not something you do. When it is taken as a mental get fit programme, it just becomes a hobby. Samadhi is not a process, it is the thick soup of your life, or, if you prefer, it is clotted cream, not skimmed milk. If it is any kind of action then it is like tasting. It takes faith to put a spoonful into your mouth.

Enjoy Your Soup
Samadhi has no particular home because it makes home wherever it is. It is not just one perfect mind state. It does not really matter which bit of the soup ends up on your spoon. It is all essentially the same soup. There might be a bit more carrot in this spoonful and a bit more pepper in that one, but that kind of difference is really neither here nor there. Buddhas enjoy their soup.

In the scriptures, samadhi is sandwiched between sila and prajna. Sila basically means restraint and prajna means seeing what is really going on. So sila and prajna are “stop” and “look” and in between them is samadhi. In order to look and see, you can concentrate whatever it is that you have just stopped. Stopping just means noticing. “Oh there I go again,” but don’t then dismiss whatever it is - resentment, pride, glee, one-upmanship, self-pity, whatever - concentrate it until the colour is really dense. Then you have something definite to look at - something called life.