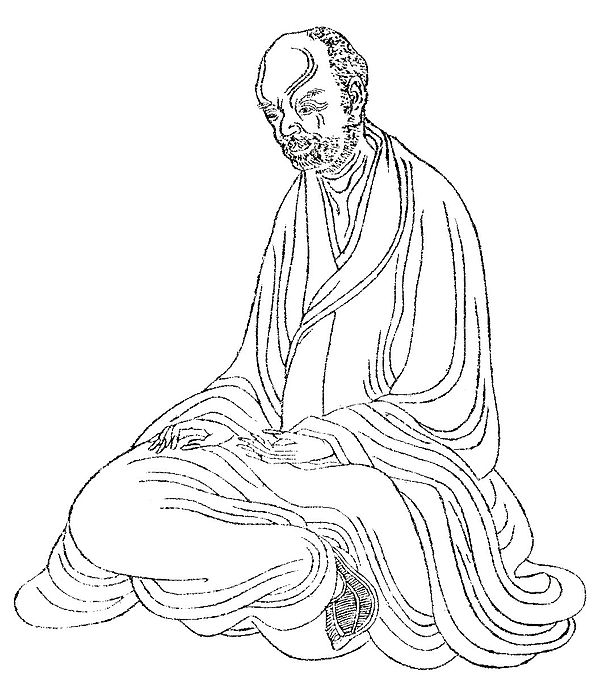 Mount Lu is in the centre of China, just south of the Yangtse River, nowadays close to the city of Jiujiang.  The area is a national park with spectacular scenery.  Throughout history there have been many hundreds of temples - Buddhist, Daoist and Confucian - in the area.  It is nowadays a popular tourist destination.

Hui Yuan was well versed in Taoism and Confucianism, which he studied in his youth and was from an early age noted as a remarkable scholar.  He was always enthusiastic for learning and when he was 21 he set off to study with the Confucian Fan Xuan.  However, he was prevented from getting there by warfare that was going on in the area and stopped at Mount Heng where he found the thriving Buddhist monastery of Dao An (道安, 314–385).  Hui Yuan’s brother Hui Chi joined him there and the two brothers became enthusiastic disciples of Dao An, accompanying him on many journeys through the war ravaged land.  During this period, Hui Yuan studied and wrote about the relationship between the Buddhist principle of Prajna Paramita and indigenous Chinese philosophy and religion.

By the year 386, Hui Yuan was already an important monk.  However, the progression of the war forced him eventually to part company with Dao An and the two brothers travelled south to safer country. They stopped to visit a friend at West Forest on Mount Lu and were greatly impressed with the area which was “pure, serene and suitable for calming the mind”.  They decided to stay and Hui Yuan resided there for the rest of his life. A Gift from Buddha

He resolved to establish a temple, but was not sure if it was proper to build one in the middle of a forest.  He  prayed to the Buddha for guidance.  That night there was a great storm.  Many trees were torn down, thus creating a clearing for the temple and also providing the wood for its construction.  He took this for a sign and engaged the local magistrate who organised the building.  The main hall of the temple is, in consequence, called the Shen Yun Hall, which means that it was donated by the Buddha.  As the temple was to the east of where his friend lived it was called Dong Lin Temple (East Forest Temple).

In 391, the monk Sanghadeva from Kashmir arrived at Mount Lu and stayed for several years.  Sanghadeva was an expert in Abhidharma and Hui Yuan enthusiastically engaged him, got him to translate important Abhidharmic texts into Chinese and mastered his teachings.  This led to a famous debate with the philosopher Dai Kui who maintained that what happens to us is random, but Hui Yuan successfully defended the Buddhist principle of karma.

In 400, Hui Yuan and several of his disciples staged a poetry writing workshop writing verses in praise of Mount Lu.  These poems still survive.  The language of the poems has a distinctly sublime and transcendent tone.

In 402 Hui Yuan established an association of monks and lay people called the White Lotus  Society for the worship of Buddha Amitabha by means of a ceremony in which 123 monks and laymen vowed to meet again in the Pure Land and thereafter to assist other members of the society to attain rebirth in the Pure Land. At this time another collection of poems was produced called Nian Fo Sanmei Shi Ji which means “Verse Collection on Nien Fo Samadhi”. Only a few of these poems survive.  Around this time, Hui Yuan also wrote a work on “Direct Encounter with the Buddhas of the Present” based on the teaching of the Pratyutpana Samadhi Sutra. The events of the year 402 are, in effect, the beginning of the Pureland School (Jing Tu) in China, which is, in consequence, also sometimes called the Lotus Sangha.

On Not Bowing to Kings

In 404, he wrote the text “On Why Monks Do Not Bow Down Before Kings”  (沙門不敬王者論) and, on his advice, the ruler of the Eastern Jin allowed that Buddhist monks not bow to the king.  This move established the independence of the Buddhist clergy, based upon the principle that monks are no threat and so do not need to be dominated and subdued.  They are no threat because of their belief in karma and their aspiration to be reborn in the Pure Land.  This was one of several initiatives by Hui Yuan to engage with kings, ministers and the political class for the betterment of society and the protection of the sangha.

In 404 the war came to an end and travel between north and south was once again possible.  Hui Yuan began a correspondence with the famous translator, Kumarajiva who was resident in the Norther capital of Chang An and sent some of his disciples to Chang An to assist with the translation work.

In 410 the monk Buddhabhadra came to Mount Lu and stayed for a year.  He translated some mediation texts and also gave a verbal account of the Buddha Image Cave in India at Nagarahara.  This inspired Hui Yuan to create a Buddha Image grotto on Mount Lu.

On to the Pure Land

Hui Yuan was thus a hugely erudite monk who nonetheless taught in a manner that ordinary people could relate to, principally a doctrine of faith, in which calling upon Buddha Amitabha would lead to rebirth in that Buddha’s Pure Abode in the West.  He died at the age of 83 at his temple.  In accordance with his instructions his body was left exposed at the foot of a pine tree.  Some time later the disciples buried the remains.

The life and work of Hui Yuan exemplifies several important aspects of a great Dharma practitioner.

- he was always enthusiastic to learn and encompassed a wide range of interests, yet was abler to speak the common language and relate easily to people at all levels of society.

- He was a good organiser and built up a network of Dharma companions, encouraging each to thrive in their own particular genius.

- he lived a life that was contemplative, yet simultaneously socially engaged.

- he was a lover of nature and of poetry and strove to create an environment that was good for the soul.

- he founded a movement that flourishes to this day, touching the hearts of millions of people.