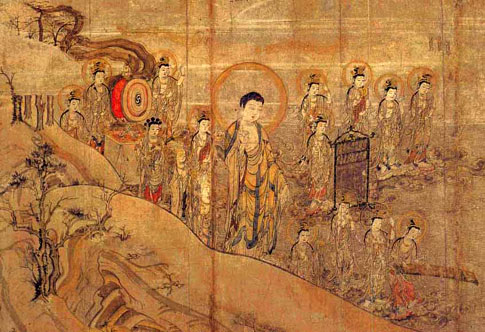 Nembutsu literally means "keeping Buddha in mind". As a practice it generally means reciting a phrase such as "Namo Amida Bu" which achieves this end. This can be done as an intensive practice, as when sitting alone or together before the Buddha shrine, or it can be a "dispersed" practice in which one integrates saying the nembutsu phrase into daily life. When something good happens - Namo Amida Bu. When something bad happens - Namo Amida Bu. When something else happens - Namo amida Bu... and so on. There are a variety of possible forms of phrase, but Namo Amida Bu is most common. Nembutsu can also cover other more difficult practices such as visualisation which is another way of keeping Buddha in mind. The basic aim is to keep the Buddhas in mind by one means or another as much as possible and the calling of Namo Amida Bu is the most common way to do this.

Nem is the Japanese for "mindfulness" so you can also say that nembutsu is mindfulness of Buddha. It is the most popular form of Buddhism in Japan and very widespread throughout the Chinese influenced world. This is in part because it is both simple in concept and convenient in practice - you can do it while walking, driving, sitting in a deckchair, or whatever.

Nembutsu practice is a kind of continuous prayer.  It is assisted by having a mala (rosary) of beads.