* THE MERIT OF WEARING BUDDHIST CLOTHES

Chapter 12 of the Shobogenzo, the major work of Zen Master Dogen, is called Kesa Kudoku. This means "the merit of Buddhist clothes". We remember that the Buddha dressed his closest followers in robes that were uniform and collectively distinctive in their orange colour and that the lay followers in the Buddha's day wore white. Buddhists, whether lay or monastic, wore clothes that declared their faith. These clothes are an aid to the training of the individual in giving up self and a sign of allegiance to the movement for world liberation. When a person takes refuge in Buddha, Dharma and Sangha, they cease to be English, Russian, Nigerian or Bolivian and become citizens of the Buddha land. When they put on the clothes of Buddha, they cease to be aristocrats or peasants, middle class or untouchable, and become those who walk together on the open way for the benefit of all people, irrespective of the divisions that the world tries to impose. In our red we are all refugees from a world of pernicious oppressions. 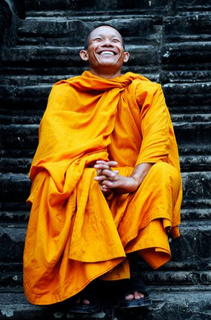 In Sanskrit the name for the robe is kashaya. This word basically means "stained" or "dyed". The wearing of the robe symbolises a willingness to give up one's own colours and be dyed by the colours of the buddhas. It is thus a symbol of being completely willing and this is the core of Buddhist training. When we put on the clothes of Buddha we abandon the clothes of class, race, and ego. It is notable that there are several sutras in which disciples fail to recognise the Buddha himself on meeting him. This is because he wore the same clothes as all of them. The bhikshus made their robes of rags, thus identifying themselves with the poorest section of society. What would the equivalent be today? Is the original spirit captured by flowing robes and togas? Perhaps not. A more down to earth, practical attire gives a more appropriate message. The rag robe was stained with ochre, which created both uniformity and distinctiveness. Nowadays, the colour varies a little from sangha to sangha. Red is quite acceptable in Buddhist terms and in a modern context can give a message of radical resistance to oppression in society. This seems right in terms of the Buddha's original intention.

Clothes give a strong message about a person. They declare one's allegiance. This has always been so. Teams have colours. There is no escape from this. The individualist thinks to be apart from it by dressing according to his or her own taste – but this gives a very clear message. The conformist wants to just be like everybody else – and this is a clear message too. Everybody gives a message by his or her clothes. The question, therefore, becomes, what message is it most important to give? A person who has taken refuge in Buddha, Dharma and Sangha does not want to give any other message. They therefore wear the clothes of Buddha whenever they can. Obviously they will not do so in circumstances where this would lead to great harm – as in some persecutory regimes – but these are extreme conditions that should be resisted by all means.

By a person's clothes you can see their social group and their self-image. In the case of a Buddhist community these factors co-incide in being followers of Dharma. The Dharma-farer has no wish to cling to their own personal style nor to signal identity with a social class – unless it be the oppressed.

Dogen says that the best material is rags. Failing that, coarse cloth should be used. If you cannot get coarse cloth, use a finer kind. If you cannot get that then, if there is no choice, use silk. We can see from this that there is, in the way Buddhists make their decisions, an up-ending of worldly values. The worldly person likes clothes that express their feelings, or feel fine on the skin, or add to the person's status or convey a desired image. The Buddha was often unrecognised for himself, however. He was not recognised as Siddhartha Gautama, but as a wandering friar.

Clothes declare a role. Members of a Buddhist community perform many functions that the wider community regards as sacred. They do not perform these in their personal capacity. They do them in their capacity as representative of the Buddha, the Dharma and the Community. The clothes declare this and so protect them from personal aggrandisement. In some sanghas, a monk performing a particularly "sacred" function will even hold a fan in front of his or her face while doing so. The message this gives is that this is not "me" personally doing this - I am merely the hands and feet of the buddhas. This is important in freeing a person from the dangers of ego involvement while conducting the work of the sangha.

While taking away personal identity, the common clothes of sangha members contribute to closeness within the community. Clothes can be shared and there is an immediate sense of commonality among people who dress alike. When we enter the sangha we give up old positions. In our own group we eventually realised that old class based attitudes were still a barrier to our close working together. We have overcome this. Wearing similar clothes has contributed to this overcoming. Through such processes as this there comes an intimacy that helps to dissolve old personal karmic wounds and an inter-reliance that can stand one in good stead when carrying out the work of the Dharma in more difficult circumstance when the support and loyalty of one's community become crucial factors. The clothes also can protect one from inappropriate attention from other members of the public. If one appears in the clothes of Buddha there is a message that people understand that say, I am not available for certain types of relationship and I am available for other types of relationship. We are then less likely to have people seducing us into inappropriate indulgences and more likely to be approached in matter where we can in fact be of some assistance.

The distinctive colour of the clothes – the Buddha chose bright orange – helps to declare the message of enlightenment in the world. It is both a magnet and a provocation. The image of the orange clad monk is a favourite one on holiday brochures, for instance. This image catches the attention and conveys to many people a sense of serenity – even to people who know little or nothing about Buddhism. The Buddha evidently did not intend to keep the truth he had found secret. He was moved by compassion for the world and saw that the principle route to its relief was through a change in public consciousness, not just the training of a few. The Dharma is to be declared widely by all possible communicative means that are ethically consistent with its message. Clothes are such a means.

Wearing the clothes of Buddhism is a challenge to the wearer as well as to others. When one is animating these clothes, one knows that one is not acting in a personal capacity. The teaching on non-self becomes more real and tangible. One is no longer regarded by the public as John or Jane. One is seen as a Buddhist. For the wearer, this is a challenge to live one's Buddhism totally. It is an invitation to speak, act, and move in an enlightened way at all times. For the observer, it is a challenge to think more deeply about what one is giving one's own life to. Does one's life have a purpose? What hat is one wearing?

This clothing is "the clothing of liberation", says Dogen. "It can liberate us from all hindrances such as karmic hindrances, hindrances of affliction, and hindrances of retribution… When Buddhas realise the truth they are always wearing these clothes." How is this? It is because liberation is not attained when we are acting in our own capacity and for our own interest. Liberation is attained when we give up our personal identity and enter into a bigger story. In that bigger story we do not carry the distinction of our personal dress – we merge with the sangha and are all of one appearance without rank or pride, doing what needs to be done without regard for personal preference. This is the only escape from personal karma.

The clothing a person wears is a powerful influence upon them. Even the worldly person knows that different clothes feel very different and induce different behaviour. The Buddha taught that our training begins with a reform of our behaviour. Putting on the clothes of the behaviour to which we aspire is a wonderful aid in achieving the goal. There is a story of a prostitute called Utpalavana. She often mocked the nuns for their virtue. One day, in order to make fun of them, she put on a nun's clothes and danced around the brothel in them. Many years later, this woman became a nun herself. Children dress up in the clothes of adults. Later they wear them themselves. Clothes have a powerful influence. Since this is so we should choose the clothes that are conducive to our goal and purpose rather than those that point us in some other direction.