Carol drove me into Ottawa at midday on Wednesday 12th. I had spent the morning being interviewed and making a short film. In Ottawa we had lunch at the vegetarian restaurant and then went on to the airport where she dropped me off. I was to take a local plane to Montreal then fly to Paris and on to Bilbao in Spain with Air France, due to arrive at nine in the morning local time the following day. F would meet me in Spain and take me back to stay with him in a village near Vittoria. Including the car trips at each end, a total journey of about 19 hours - challenging but not out of my experience as I often make similar journeys two or three times per year.

The first leg went fine. I arrived in Montreal having flown over the snow covered land from Ottawa and caught my connection to Paris. The flight was full. Once we were all boarded, there was a delay and then an announcement. There had been a medical emergency, somebody was ill and they had had to get a doctor, then decided the person had to leave the plane and they were searching for the luggage. We were an hour late leaving Montreal. I wondered if I would arrive in Paris in time for my connection.

The flight to Paris was eventful for further medical emergencies which happened to occur just by where I was seated. The man in the next seat across the aisle from me started vomiting and was clearly in a bad way. Several staff crowded round attending to him for much of the flight. While this was happening, a woman two rows back started having what I think was an epileptic fit. She was on the floor, also being attended to. The two patients did slowly recover some normality, but the flight staff clearly had a difficult time.

We arrived in Paris late. In fact the plane that I was supposed to be on going to Bilbao took off as we were disembarking. My baggage was booked through to Bilbao, so I correctly assumed that they had not loaded it. I went to the Air France desk and they rebooked me onto a flight leaving at 7pm that evening and rerouted my luggage accordingly. This would mean arriving in Bilbao more than half a day late. I needed to phone and tell F not to come to the airport in the morning. Then I discovered that my phone was not working. I assumed the battery must be flat. I went and logged onto the airport wifi with my computer and tried to make contact by e-mail and skype but it was too late. He was already nearing the airport expecting to see me.

With no phone, I was now limited to communicating when I was in a wifi area which made for further difficulties later in the day. I sat it out in Charles de Gaulle Airport. You can say a lot of nembutsu sitting in an airport. They had given me a voucher for some food, which helped. Meanwhile, my friends in Spain made new arrangements for me to be met when I arrived late at night.

At seven in the evening, we all got on the plane and sat there for some time until there was an announcement that there were technical problems with the aircraft. They would fix it, but we would be late taking off. As there was no wifi in the aircraft, I could not let the people in Spain know. This was frustrating. After waiting an hour or so there was a further announcement that we were now ready to take off. The plane started to move. Then it came to a halt again and the pilot announced that the same fault was still occurring. We would all be sent back to the terminal while they fixed it.

In the terminal, we were told that they would find another aircraft and we would fly later that night. Passengers milled around the announcement boards, waiting for further information. Then came the announcement that there was no other plane available. There would be solutions for each passenger, but first we must reclaim our baggage. We went and waited for the carousel and then queued to be individually seen. The airline desk woman drew me a map and sent me to an Isis Hotel via two bus journeys, equipped with vouchers for a meal and one night stay. However, it was only half a night as I had to get up at 3am to continue the journey.

I got to the hotel after 10pm but still just in time to get some dinner. I got to bed about midnight. At 3.30am the taxi took me at high speed the three quarter hour drive across Paris from the hotel to Orly. As it turned out I could have gone an hour later and still made the flight. The plan was to fly me, along with a number of other passengers in the same plight, to Biarritz in the south of France and then put us all on a bus to Bilbao.

We got on the plane and were all seated on time. Nothing happened for a while. Then came the announcement: there were problems with the aircraft and there would be a delay while they got it fixed. This was getting to be the normal. Eventually, however, we were airborne. I had a window seat and looked out over silver clouds that seemed to cover the whole of France. When we got to Biarritz we collected out bags. There was a big white bus waiting. Before getting on I managed to send a message about the delay.

The two hour or so bus journey was uneventful, passing through the towns and green country of the Basque lands. I fell sound asleep on the bus. When we arrived at Bilbao somebody gave me a shake to rouse me. I got off the bus and wandered into the terminal building, anxious to communicate with my friend who was coming to collect me. Still very sleepy I managed to do so and then remembered my bag. I went back outside and the bus had gone. There was no sign of my bag.

I started making enquiries. My friend arrived and helped. We went to different desks and made phone calls. The lady at Bilboa Airport was very helpful. It all took time until we worked out that the suitcase with my clothes had been stolen. Fortunately my passport, computer, camera, phone and money were not in it, but quite a few other things that travel with me are now gone.

I did make it to my final destination after a total of about 46 hours travelling. Well, that’s life. I shall get some rest and then start planning my new wardrobe! Namo Amida Bu.

Yes, I can identify with Paddington. :-) NAB.

Happy you are well and got help where needed. Namo Amida Bu 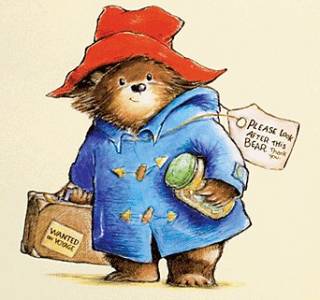 Glad you arrived, eventually! You need a little 'Paddington' note on your coat - "Please look after this bear/Dharma teacher"