FIRE AND WATER ON THE DHARMA PATH

Yesterday during breakfast I had a bit of a difficult conversation with Els about religion. In her younger years she had a strong belief in God, but along the way she lost it. One of her questions is “How is it possible that there is a God when there is so much suffering in the world?” All these questions are rising within her, because she wants to come to the autumn retreat at Eleusis. I know why she wants to come. She is carrying around her koan every day and struggling with it. She is searching for answers on her koan.

Not a Dharma Teacher

Life hit her with a stroke nine years ago. The right side of her body is partly paralysed. She can walk with a stick and she is limited in her way of speaking, so that she is only saying the essential, which is quite a wonderful way of speaking. She has a very good sense of humour.

With her strength and fighter's mentality, strong will and adventurous spirit, she has build quite a new life for her self. She is surrounded by loving friends and family.

I can see that people love Els because of her courages and positive attitude and her friends and family responded very warmly and supportingly about her plans to go to Eleusis for three months.They are also making jokes, because they know Els as someone who has a resistance to a spiritual life. On Els' sharp questions I had no answers this morning. I felt answer inside myself, but I was not capable of putting them into words. One moment I said to Els “I am not a Dharma teacher, I don't know how to answers these questions.”

Later I thought about a chapter in a book of Nico Tydeman (well know Zen teacher in Holland). I read it a couple of days ago. In his book 'Vormen van oneindige leegte' (Forms of Endless Emptiness) he writes about his travels through Japan and describes several Buddhist schools in history. In this book he has written a wonderful chapter about Pureland Buddhism, Nembutsu and the life of Shinran.

I drank in this chapter voraciously. It was wonderful for me to read something about Pureland Buddhism in my own language, Dutch, and I felt also quite moved by the whole chapter. It is a bit difficult to catch in words what moved me so much. Nico Tydeman paints the life of Shinran in such a way that between the lines one can recognise some of the personal koans of Shinran during his way on the Dharma path. He writes about the love he had for his teacher Honen. Nico Tydeman has also written a beautiful piece about one of the essential principles of Pureland Buddhism, about other-power. I would like to share something I have read:

He is writing about the faith in Amida:

“To believe in Amida is not the result of logical reason or intellectual thinking. Belief and faith are incomprehensible and do not lean on anything. To not understand is to understand, according to Shinran. To believe is not a matter of self-power, but will be awakened by the other-power of Amida.”.... “To say the name of Amida is not a personal, physical deed, … The Nembutsu is an expression of gratitude for Amdia's other, redeeming power and is asking for a specific consciousness...”

The one who is going deeply into one's self-consciousness and goes further than one can go all by oneself, denying oneself completely and no longer trusting in oneself, then one will find on the bottomless bottom of one's consciousness the concept of Buddha. By pronouncing the name of Buddha, I design Buddha, Shinran says. A Buddha manifests effortlessly. Amida Buddha's other-power works spontaneously. She is the most authentic, direct and natural power in existence.”

I am struck by the notion of the bottomless bottom, the place you don't know anything any more, is the place to meet Amida, Buddha, God, whatever you like to call the Sacred.

This in it self is a liberating concept for me. When you feel completely helpless and powerless and recognise that you are indeed powerless, you can't do it by yourself and you don't have to. There is a possibility to have faith in something els in an other-than-self, in other power. Instead of fighting and struggling, to surrender to life and what is going to happen and there is the possibility of unexpected care and grace from life itself - the Sacred. 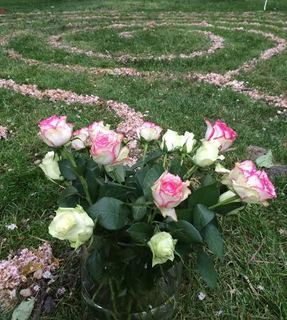 In the evening I was invited to join another sacred activity: to walk a labyrinth. Behind the monastery there is beautiful park with old chestnuts trees. Four times a year the women of the monastery walk a labyrinth they have made in this park. The path of the labyrinth is a symbol for the path of life or the way of transformation. There is the route inward to your inner world and the way out to the outside world. Along the path you can experience all kind of things. Els was also invited, but at first she didn't want to go. Five minutes before we left to the park, she changed her mind and joined us.

The location of the labyrinth is beautifully chosen and surrounded by the old chestnut trees.

This evening 13 people wanted to walk the labyrinth. Eleven women, a man and a boy. I guess that the little boy was about 4 years old; the little fireman. I call him like this because the first time I met him in the garden of the monastery he was carrying his teddybear and wearing a fire helmet.

Before each element entered the labyrinth they introduced the elements with some words. The woman who was representing the element air was Miriam, and she was standing at the entrance of the labyrinth. I had seen here before in the monastery but she looked quite different this evening. She was wearing a long black coat and holding a meditation bell. She spoke only a few words and then she opened her mouth and only sung a kind of “Ohm” in different tones, very beautifully. She looked strong, quite impressive with a certain soft lightness in her face. I saw a priestess standing at the entrance of the labyrinth. Els was the second one who stood up to walk to the entrance of the labyrinth. She had a decisive expression on her face. Fire brought her to the portal of the labyrinth. Somehow Els was really entering the labyrinth. I saw her from outside stepping in. After her first step into the labyrinth she was standing still for a while before she walked further. The expression on her face changed. Slowly she started to walk and immediately she started to cry. She kept on walking but the element water overwhelmed her fire, till she cried out loudly and she almost tumbled on the ground. Miriam caught her and held her. I walked to them and held Els too and cried with her for a moment. Miriam asked Els if she wanted to walk the labyrinth with me.

This time we entered the labyrinth together. The path was small, I walked in front, Els right behind me while we walked hand in hand. In the meanwhile more people where walking this path. Including the little fireman. The little fireman took his path seriously, playfully and in complete silence, he took it over and over again. Sometimes he was very patiently walking behind other walkers in the labyrinth, sometimes he had to much energy and passed others to be in the inner heart of the labyrinth quicker. When Els and I arrived in the heart of the labyrinth the little fireman soon arrived too. We stood there for a while with the little fireman between us. He was at ease waiting and standing with us. Then we returned to our way out of the Labyrinth. This time Els walked alone in front of me, her face covered with black marks of make-up tears. At the end of the labyrinth, before I went out I looked at Miriam, the beautiful priestess for a while, I thanked her with a gasho.

When Els and I walked back to the monastery she said:

“It was so beautiful. I felt so connected with everyone.”

I thought about our discussion from this morning and said:

“I think this is the essence of religion. To meet the other, to feel connected with the other is to meet God, Buddha, or however you will call it. This is the way to experience God.”

(With thanks to Els who gave permission to write this story) 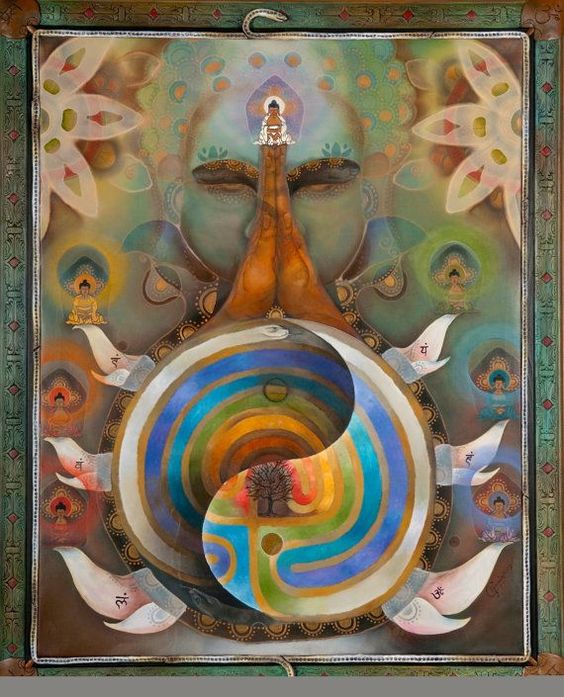 Thank you Annie, I can't tell you more about this image I am sorry. I found it on the internet (on pinterest) by accident.

Comment by Annie Parry on May 26, 2016 at 8:37
Beautiful sharing♥️ And this last Image- can you tell about it please - I have copied and saved it. NAB

Lovely. Thank you for posting this. I hope Els makes it to Eleusis. Suffering in the world is not a problem in Buddhism, it is the reason for Buddhism.