This morning we had a discussion about the passage in the Bible in Genesis chapter 11 which is the story of the Tower of Babel. The story is simple enough. The people of the Earth gather and meet in harmony and set to work to build a city and a tower that they intend shall reach to heaven and they make bricks and start building and all is going well because they all talk one language. 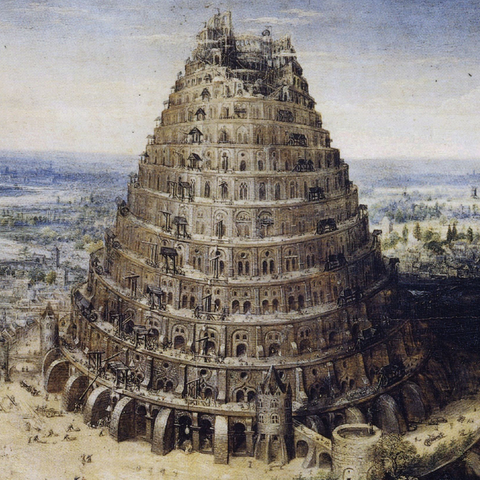 God comes along and sees what they are doing and thinks that this will never do and he destroys the tower, confounds their language and scatters them upon the face of the Earth, no longer to understand one another, lest they start to have the power of God themselves.

Ancient & Modern Ideals
This story neatly highlights the difference between the attitude of the ancient world and of the modern world. To a modern, what the people of Babel were doing seems like an ideal. It is a picture of humankind united, all able to understand one another, working together and, by doing so, becoming more and more powerful and capable. What could be more ideal?

To an ancient - of almost any of the ancient cultures, Greek, Hebrew, Indian, Chinese, whichever - the story is an important moral tale about how trying to play God inevitably brings disaster. It illustrates the sin of hubris. To the ancients, hubris was the worst sin of all. To the modern there is hardly any equivalent idea.

We might argue about who is right in a metaphysical way, but the discussion would be fruitless. The ancient and the modern would simply not understand one another. The different views are embedded in such a huge matrix of assumptions and associations about how things work that are different in the two epochs.

Learning from the Ancients
Nonetheless, there may still be something for we moderns to learn from that earlier age. Simply poking fun at their superstitions, as we might consider them, will only reinforce what they would see as our own arrogance. The old way is summarised in the adage “Pride comes before a fall.”

Modern mankind is currently haunted by a fear that this is true. The ancient attitude has not in fact entirely died out. It still resides deep inside us. Furthermore, we see plenty of evidence that our strengths have led to dangerous side effects. Our power has brought the possibility of wars of untold destruction. Our civilisation has destroyed half the other species on the planet. It is easy to see our increasingly Babel-like world edging toward disaster.

Again, if we consider our ideals, would a single world government or a single world language really bring improvement or would it usher in an age of tyranny more draconian than any seen before? Is there not some advantage in groups being insulated from one another. Is the destruction of tribes and their integration into “the modern world” really such a good thing? Even in my life time the world has, in a number of ways, become less varied and, therefore, less interesting, than it was. If I go to the other end of Europe today, the town high street looks much the same with the same shops and products as back home. That is not much of an adventure.

The Personal Level
It is also possible to take the moral at a more personal, smaller scale, level. It is rather nice to play God once in a while. It can be liberating and a good way to explore one’s quirks. When I had an extended period of being here at La Ville au Roi (Eleusis) on my own, I discovered many aspects of myself that get repressed in social contexts. The sense that “This is now my place and I can do whatever I like with it,” was quite liberating. That is one way of learning some things.

At the same time, it brings danger. It is very easy to over-reach oneself. They say that if you give a man enough rope he will hang himself and much spiritual training actually proceeds in this way. When a new person goes to a spiritual training centre, monastery, ashram or whatever, he will at first be given plenty of space to show himself. What is he (or she) capable of? What does he do easily and what does he play shy of? Then, bit by bit he is given more responsibility and a more integrated part in the community. Along this path one sees how much selfishness, conceit and ambition the person has - how much hubris.

The more hubris, the more dangerous the person is to the spiritual health of the community. One thinks of various instances of great charismatic figures from the early days of Buddhism in the West who caused great scandals, not just because they got into bed with too many women, but more especially because they had grandiose ambitions and posed as supermen (which was no doubt what attracted the women).

Middle Way
There is a middle way. The truly spiritual person is not a weakling and certainly learns to speak other people’s languages, and such a person does get a lot done and bring cohesion to communities, but that cohesion is not for the purpose of displacing God, it is to serve Him.

She or he fully realises the power that a human being has, but realises that, in the greater scheme of things, this is a tiny power, and so is humble in a more fundamental sense, humble before Heaven.

In Ireland it used to be said that anyone who damaged a fairy tree - a hawthorn - was in danger of retribution from the “little folk”. Nowadays, when bulldozers come to “redevelop” a piece of ground, they do not even know what species of trees they are destroying. There was something gentler in that ancient way that we would do well to pay some heed to.