This morning I am in the hospital around nine o'clock. Normally I get there about ten. I know that David has had a wretched night and I am awake anyway, so I go to the hospital earlier. I arrive just in time to go downstairs with him for an x-ray.

While we are waiting for the x-ray David looks a bit pale, but is in a good mood. He tells me that the new green and yellow pain killers are finally working. During the night they had given little relief, but in the morning the nurse had given him some more and white ones too. However, during the x-ray procedure he nearly passes out.

A Rage of Spots

David never normally uses medication at all. Now he is stuffed with injections, pills and aerosol mask medicine and his body is starting to protest. Today was quite horrible. David is starting to respond with allergies to the medication. This morning as I go to wash his back I see that his whole skin is fire-red, a rage of spots, so I call for a nurse. Obviously an allergy. What is the solution? Of course another pill... they give him antihistamine.

Within a half hour David becomes nauseous and faint and is in a cold sweat. These attacks continue on and off for several hours, during which he discovers that it is best for him to sit on a chair instead of the bed as he then has less pain in his leg. He sits for hours in the chair with a bowl near by feeling all the time that he might throw up any minute. 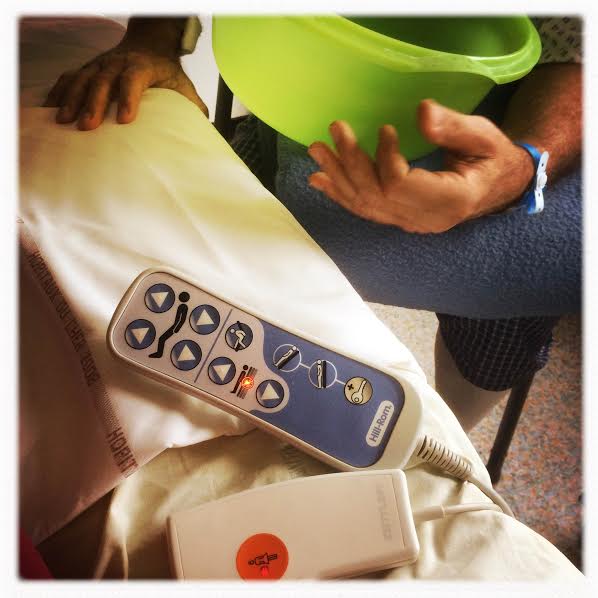 At this stage, David thinks he is having an allergy to the coloured pain killers, but it could be any of the other drugs. During his better times I read, bit by bit, the new messages and, for distraction, some of the poems of Christopher Robin again. Around two o'clock he finally decides to lay in bed and is soon asleep.

I am still worried about David's hip. The doctor has promised to tell us the result of the x-ray this afternoon. He is still thinking it is osteoarthritis, and he said “If it is, he will have to stay in bed.”

These words sound horrible. For David's thrombose leg it is best to have exercise... and an operation with all these blood thinners... I don't know if that is possible.

While David sleeps I feel my stress. I practise some whispering Nembutsu. It works like unplugging the sink so the water can flow through.

After another hour a nurse wakes David up for his oxygen treatment. He looks a bit better. The nausea seems less, but the itching rash continues

One hour and a half later the Doctor arrives with two lots of news... both bad.

The blood test was not good. David needs a bigger dosage of blood thinners and the x-ray shows that David has osteoarthritis, not just in one but in both hips.

The doctor is thinking that David's allergy is to the bloodthinner, so he wants to change this medicine tonight. He says to David:

“Yes”, said the doctor and both men grin, while I repeat “Rat poison??!”

And more days in hospital.

With crutches? and a wheelchair? return to Eleusis?

Time to think about where life will take us in the months to come...